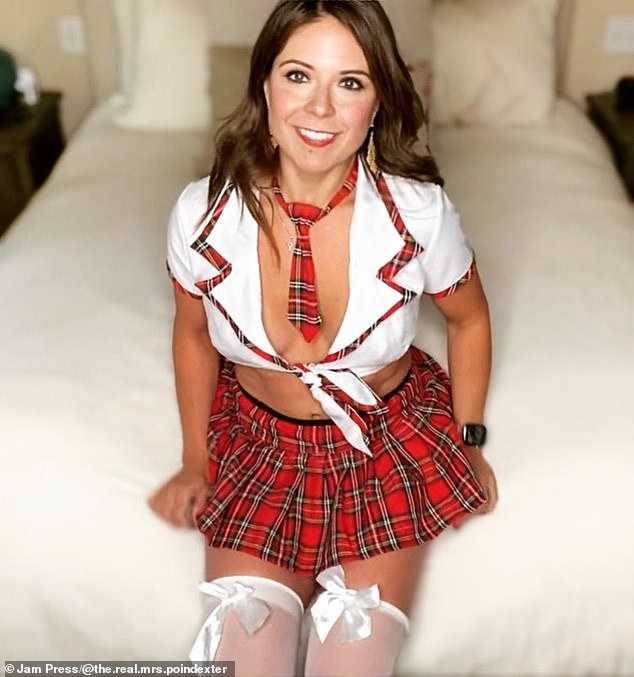 What started as an endeavor to rekindle the flames of a relationship that had fizzled has blossomed into a major source of income for a California couple. However, the bawdy endeavor as an OnlyFans model by a mother-of-three is now introducing a new set of challenges, including being bullied by fellow parents at her kids’ school.

Tiffany Poindexter, who lives in a close-knit Catholic community in California, says she’s received backlash after her secret OnlyFans account was exposed.

“I felt pretty unsexy when I went through early menopause,” Poindexter said, according to MEAWW. “One of the things we tried to make our marriage more exciting was posting a picture of me in a bikini on Reddit.”

“It was Chris’ idea, and it became so popular that all these people started asking for more — so we set up an OnlyFans and I just blew up,” she explained. “It’s something we just completely fell into, we had no idea how successful it would become. We started in September 2019 and no one knew about it. No friends, family or anyone. It was a sexy secret between me and my husband that was so exciting and fun.”

However, the Poindexter’s sultry secret blew up in July of 2020 from a very awkward place – their kids’ school. Fellow parents and neighbors were ticked off after being tipped off of Tiffany’s titillating travails.

“Someone came across my account and suddenly I had moms from school texting me and leaving voicemails saying I had to leave the school,” Tiffany revealed. “Some women from my area actually printed out pictures I posted on my OnlyFans and mailed them to the principal of my children’s school. We were called a load of names; apparently, it was ‘disturbing, disgusting, horrifying’ and ‘my children should be kicked out!’”

Soon enough, the other moms informed the town’s priest and bishop. The couple’s sexy secret was now the town’s gossip.

“It hit me in the gut every time I heard something new,” the self-described “soccer mom” lamented. “In the very beginning, I thought I was going to have a nervous breakdown. It was just so intrusive, it was something that was supposed to be a secret in our marriage. They think I must be having sex with all these men and I’m not! It’s just a hot sexy wife fantasy.”

“There are certain people who just won’t leave us alone but 99% of people who find out really don’t care at all,” Chris said. “A lot of people we know just say: ‘You do you guys.'”

Chris joked, “I reckon most of the husbands have taken a look at Tiffany’s account. If I had heard about a school mom doing OnlyFans, I definitely would have! Maybe that’s why these women have such an issue with us.”

Chris is a very supportive husband when it comes to his wife’s salacious OnlyFans career.

“The routine is really simple — I’ll prep 10-12 pics at some point, and she’ll upload them in the morning with her captions and schedule them to drop each hour throughout the day,” Chris described his involvement in Tiffany’s racy venture. “She’ll mix in prepared sexy pics (like a lingerie shoot) with what she’s doing at the moment.”

“And she does an ‘after work’ video of undressing from work clothes and summarising what happened that day which is probably consistently the most popular thing she does,” Chris added. “She’ll answer messages all day as there are a lot and you can’t let them pile up or it gets crazy. It’s not too hard even with the kids, although sometimes the screaming and fighting can be heard on an end-of-day video and she has to re-do it, or I have to crop the sound!”

You’re probably wondering, “How much does an OnlyFans model mom make?” It turns out – A LOT!

In her first month, the 44-year-old adult model earned $14,000 on OnlyFans by posing in lingerie while doing “regular mom activities” like cooking or cleaning, according to The Sun.

Tiffany Poindexter, who goes by the user name “Mrs. Poindexter” on the OnlyFans app, now makes more than $150,000 a month selling her provocative photos and videos. Tiffant has over 515,000 followers on Instagram and nearly 150,000 followers on Twitter.